Accommodation in the town of Dubrovnik, Croatia

Click to view the best offer of private accommodation in apartments and holiday houses in Dubrovnik, Croatia. Large offer, with most detailed descriptions available. Great prices and fast on-line booking of accommodation for season 2021! 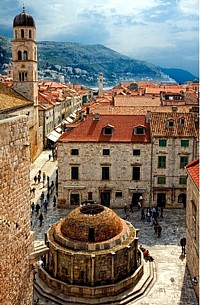 Eternally murmurs the sea, the hard rock stays unchangeable in its place lasting for ever, the sun emanates its warmth over the beauty of this ancient city and its shores. Dubrovnik likewise seems to be eternal and rises like a Phoenix in front of its friends' eyes when they approach it hurrying from all the sides of the globe. The city below Srd, its geographical and religious patron, a city of a unique beauty and harmony, spread out on the stone rocks and cliffs descending into the embrace of the sea and the waves, has been living and existing through its history in all these centuries up to the present days. Dubrovnik is an open-hearted city, simple and friendly when greeting any well-meaning visitor from any part of the globe. It is a city with narrow streets and high walls, but with an open horizon - like the horizons of the open sea - the sea that offered open roads in its long history. A part of the rich history has been carried over to the present day.
Having used its exceptional diplomatic art, Dubrovnik has succeeded to remain the road junction between the east and west, north and south through all these centuries. In the same way it has developed a matchless art of organizing trade, the exchange of goods over the borders with impassable barriers, with the existing contradictions of political orders, regimes, cultures and centuries always present. Today, it has become one of the world centres of tourists from all continents, where people of various profiles from all over the world gladly meet: artists, diplomats, scientists, various experts of all possible professions and trades.  It is new Dubrovnik, proud of its tradition and its entire cultural and historical heritage, proud and haughty of its present days, and especially proud of the friendship with all people and citizens coming from all over the world.

There are many beautiful places all over the world. The inhabitants of Dubrovnik believe that theirs is the most beautiful one. Nature has been merciful and has showered it with many beauties usually celebrated in poetry. The warm southern climate, the clear blue sky, the clear turquoise green and dark blue depths of the sea along the rocky coast abounding in numerous gulfs and bays, sandy beaches and steep cliffs covered with rich Mediterranean and subtropical flora. Its unsurpassed beauty, rapturous and enchanting, a beauty nowhere to be found but in Dubrovnik. 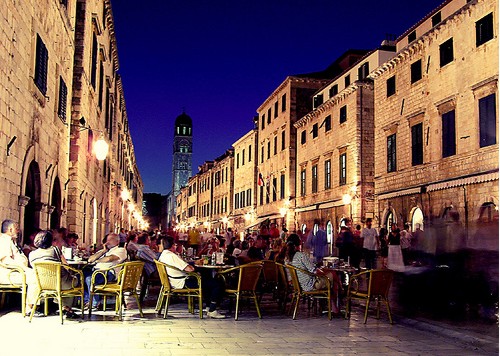 The entire city is turned towards the sun and the sea, blazing with rich colours of the blossoming gardens and hot roofs, as if it were floating on the wide-open sea, accompanied by a proud escort of the eternally green islands and small isles. There are more than 155 miles (250 km) of this coast, full of contrasting beauty and the flourishing vegetation of the South Adriatic. Life blossoms up out of the rock itself, luxuriantly swells and flourishes, enchanting by the beauty of the view and the intensity of its fragrance. In the hot summer days the concentrated scents of the sea mix with the aetheric fragrance of the fir trees, cypresses, laurel trees, juniper trees, myrtles, and other various aromatic herbs and flowers, sometimes causing dizziness by their intensity.

There is a long line of beautiful places along the Dubrovnik riviera, competing in beauty. The romantic Lokrum that seems to keep guard in front of the old harbour, the hermitlike isle of Sveti Andrija (St. Andrew) seems to guard the open sea; there are the scalloped isles Grebeni below the green Petka, the Elaphite islands competing in beauty among themselves, yet each of them beautiful in its own way. There is also the charming island Mljet with the aboundance of myths and legends and lush and remarkable island of Korcula. Thene there is the town of Ston, important for the Republic with its salt-works, surrounded by its famous walls.

There is the Peljesac peninsula, with numerous contrasting beauties, the rocky but mild Dubrovacko primorje, and to the east of the city we find the ancient homeland, the mildest of places - Zupa Dubrovacka. To the west of its borders there stretches the unique Rijeka Dubrovacka. There is the rich coast of Cavtat that is surrounded by a number of small islands, while the town itself is famous for its ancient history. Finally, there is Konavle, well-known from songs, famous for its folklore heritage and its rocky coastline, covering the area as far as Ponta Ostra at the very entrance into the Boka Kotorska.

Dubrovnik riviera map
Dubrovnik and its area cover the territory of the southern part of the Republic of Croatia and its province of Dalmatia. Its borders run from Neum in the west to Sutorina and Ponta Ostra in the east. This area lies between Bosnia and Herzegovina in the north and the Montenegro in the east.
This spread-out, comparatively narrow piece of coastline, lying below the rocky mountain range of the Dinara and some smaller mountains, becomes wider in its eastern part and develops into the small rocky Konavosko Polje, including here the mountain Snijeznica, with its mountainous part, where the coast seems as if to enter the land.

Dubrovnik panorama
The border-line of this area goes along the mountain tops on the side of Herzegovina and partly on the side of Montenegro. In some places the area along the coast is not more than a hundred meters wide - like in Duboka Ljuta.
The geographical position of Dubrovnik and the area of the southern part of the eastern Adriatic coast is extremely favourable, being situated at the end of the Adriatic archipelago and at the foot of the comparatively small mountains that can be explored on toot. These mountains have offered a favourable territory for the caravaning trade travelling on the whole of the Balkan territory.

Dubrovnik old city
At the same time the mountain range represents a natural shield defending the area from the cold currents of the continental climate; this is one of the geographical factors that have this exceptionally mild, the real Mediterranean climate of the Dubrovnik area as its consequence.
According to the Greenwich measurements Dubrovnik is situated at 42028 of the northern latitude, like Rome and Barcelona, and at 1807 eastern longitude, like Stockholm. These are the advantages of the geographical position that cause the subtropical climate and the rich vegetation.

Dubrovnik fort
and a few smaller uninhabited islands - Olip, Jakljan, Daksa, Sveti Andrija, Lokrum, Bobara, Supetar and Mrkan, stretching from Ston to Cavtat. In front of the city is the island of Lokrum.
The oldest area of the old Dubrovnik Republic, called Astarea, meaning the "land of the fathers", used to spread from Cavtat to Orasac, including Zupa Dubrovacka together with Brgat, Rijeka Dubrovacka and Zaton. All this belonged to Dubrovnik from ancient days.

Map of Zupa Dubrovacka
in 1333 the Republic got Ston with Peljesac, and soon afterwards the island of Mljet as well.
In 1399 the area from Ston to Orasac became Republican territory and finally Konvale and Cavtat were also added to it in 1419 and 1427.
On the other hand, to keep its territory safe the Republic had used arms to fight and defend its integrity against numerous attacks of various enemies.