Click to view the best offer of private accommodation in apartments and holiday houses on the riviera of Dubrovnik, Croatia. Large offer, with most detailed descriptions available. Great prices and fast on-line booking of accommodation for season 2021!

The picturesque area lying along the coast, from Rijeka Dubrovacka to Neum and Peljesac, with the gentle and rocky coast abounding in natural bays, with a mixture of pine and olive groves, vineyards and the Mediterraneous bush-covered rock, is also the home of the famous temperamental dance called "Lindo" and a 100-years' long folklore tradition characterized by beautiful folk costumes.

The wonderful bay, where sea and river water mix, is situated in the immediate surroundings of Dubrovnik, along the river bed and mouth of the Ombla. The river was called Arion by the ancient writers, and it breaks in a swift current from under the high rocks in Komolac.
This area, characterized by exceptional natural beauty and clear fresh running water, used to be the favourite summer resort of the Dubrovnik nobility. Numerous summer residences are still spread all over the area along both shores, as well as numerous sacral monuments, the outstanding one among them the 14th century Franciscan monastery in Rozat.
Some ten pretty settlements are situated on these shores, the largest being Sustjepan with an old little church of St. Stephen dating from the 11th or 12th century; there are also Komolac, Mokosica and Rozat. Rijeka Dubrovacka is an excellent natural harbour for the "Marina Dubrovnik" situated here, where numerous yachts from all over the world spend the winter season. The hotel "Dubrovnik - Marina" (Yachting) in Komolac was destroyed and looted. The ships were stolen in 1991 and taken to Montenegro. Those that could not be taken were destroyed and sunk. The marine has already been reconstructed.

VELIKI AND MALI ZATON (THE BIG AND SMALL ZATON)

The two places, with their sand beaches, in the picturesque decor of nature, are both excellent holiday resorts. Accomodation can be found in rest houses and private houses. There are several good restaurants to be found there.

It is a picturesque place, with a fine beach, well-water and ancient olive groves. Famous for its restaurants, especially by the "Soderini" castle, once the estate of a Florentine nobleman who had had to leave Florence during the Medici reign and had found shelter in these parts (16th c). The castle has been adapted into a tourist accomodation object. It has an excellent restaurant and a well-equipped auto-camp, the best in the area, with running water, a post-office and an ambulance. Accomodation in private rooms is also possible. The tourist complex "Soderini", Camping site "Rudine".

The beauty of nature and the flourishing vegetation make Trsteno one of the finest places in the Dubrovnik area. Trsteno has a long tradition of culture, and it was the place of the summer residence of one of the best known families in old Dubrovnik, the family Gucetic or Gozze. They had their residential home and land here. They were simple but learned, poets and artists, great men and lovers of nature, so they themselves reared and cultivated the present "Arboretum", one of the oldest and finest Renaissance parks on our coast. The enemy burned it and completely destroyed it in 1991. It is currently being restored. Two of the giant trees, several centuries old, attract the attention of all visitors and passsers-by. Accomodation and board of tourists possible in private rooms.

It is one of the most picturesque places of the Dubrovnik area, in a gentle bay 1.5 mile long (2 km), a fine beach, with thick pine and olive groves, a long cultural tradition and numerous historic monuments, from prehistoric to the recent ones. The Franciscan church of St. Hieronymus is among the finest in this area and dates from the 15th century. There is also the rector's palace from the time of the Dubrovnik Republic, and the summer residence of the eminent family Ohmucevic, whose members used to be excellent sailors and men-of-letters. Slano has several excellent hotels and has become one of the best tourist places of the Dubrovacko Primorje. From Slano there is a road leading to Zavala in Herzegovina, the site of the famous rocky cave "Vjetrenica" (11 miles, 14 km).

Once this was the old Astarea, today it is the living monument of many past cultures that followed one another on this sunny and fertile piece of land in the Zupa gulf, from the ancient days up to the present

The gulf itself abounds in sand beaches, gulfs, small bays and ports. The exceptional natural beauty and the convenient climatic conditions have turned this small area of the Dubrovnik riviera into a real tourists' paradise.

Once this was the first of the tourists' settlements on the Dubrovnik area, beside a large sand beach, and with the modern hotels situated in the palm and oleander woods it is one of the best developed tourists' places of this region today. Above Kupari there is the wooded hill Pelegrin with a small church on top that stands there like a guard, and round it there are many antique monuments dating from ancient times.

Not far from Kupari, in Cibaca, there are ruins dating from the Illyrian and Roman times. The whole area of Zupa still has many archaeological localities that have not yet been discovered. All of them have been burned and destroyed. It is currently being reconstructed. There is a large modern camping site. 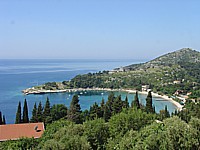 A wonderful place in Zupa, in the midst of beaches full of the Mediterranean luxuriant green plants, mostly agaves, palm trees and pine trees. The old name of the place was Subbrenum, from the name of the stronghold Brenum that used to be here in the ancient times and where the inhabitants of the destroyed Epidaurum found shelter in the 7th century.

Srebreno also has many remnants of old architecture, like strongholds, churches and graveyards. With its hotels and many rest-homes , apartments, Srebreno is today a highly developed tourist resort. There are also plenty opportunities of finding accomodation in private rooms.

Among the lavish cypresses and pine trees coming down to the sandy beaches, in the place where there used to stand the ancient Platea, today there is the well known seaside resort, a modern hotel complex with comfortable hotels and cristal clear sea on the hotel beaches. Good comfortable accomodation also possible in many fine private houses and villas .

An almost romantic village with sand beaches and a fine gentle coast as a contrast to the hard rock of Konavle. It is the only village of the Konavle area that is situated on the coast. Its name has been mentioned since ancient times, and the Dubrovnik Republic has made a special urbanistic plan for the village, treating it as its protruding defense stronghold.

The village can be reached from the highway Jadranska magistrala by a new asphalt road. Since the new road was built, the village has intensified its tourist trade.