Apartments Slano - Browse through our offer of private accommodation in apartments and holiday houses in Slano, Croatia. Large offer, with most detailed descriptions available. Great prices and fast on-line booking of accommodation for season 2021! 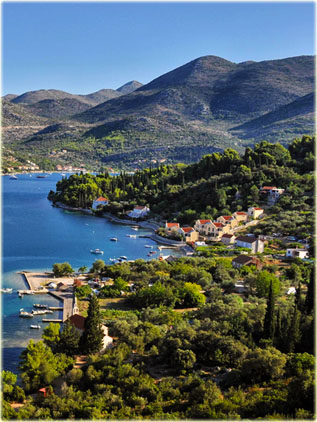 Slano is a small town and a bay, located 37 kilometers north from the town of Dubrovnik, to which it is connected with regular bus lines.  This area is inhabited since prehistoric times, with the continuity of life extending through Greek, Roman and medieval times up to this day. In the hills surrounding the settlement of Slano, there are many Greek and roman ruins and monuments, with the most prominent being  the Roman castrum at the Gradina Hill, and early Christian sarcophagi which are  very well preserved and are presented in front of the Franciscan church in the village center. Slano was important part of the Dubrovnik Republic, a part of which it became in 14th century and it served as a seat of Rector of the Republic and a holiday resort of Republic’s nobility. Up to this day, the Rectors court and several summerhouses are well preserved and serve as reminders of the might, power and cultural achievements of the Republic. During the Croatian War of Independence in 1990’s, the village of Slano was brutally attacked and devastated by the hordes of Serbian and Montenegrin terrorists, but hard working local people rebuilt their homes and public buildings and today they present them with renewed pride to increasing number of visitors from all over the world which come to this beautiful place every year.

Slano is one of the most picturesque places of the Dubrovnik Riviera, situated in a gentle bay 2 km long, a fine beach, with thick pine and olive groves, a long cultural tradition and numerous historic monuments, from prehistoric to the recent ones. The Franciscan church of St. Hieronymus is among the finest in this area and dates from the 15th century. There is also the rector's palace from the time of the Dubrovnik Republic, and the summer residence of the eminent family Ohmucevic, whose members used to be excellent sailors and men-of-letters. Slano has several excellent hotels and has become one of the best tourist places of the Dubrovnik Riviera. From Slano there is a road leading to Zavala in Herzegovina, the site of the famous rocky cave "Vjetrenica" (14 km).

Throughout it’s history, the main sources of income for the inhabitants of Slano was agriculture, fishing and trade while today the tourism is the most important source of income for the local population. With just two hotels in the area of Slano, most of the accommodation is available in private apartments and houses. Slano is a small place, but it offers it’s visitors everything they need: beautiful beaches, both sand and pebble, under the shade of trees that extend all the way to the sea, and with lots of sport activities, numerous restaurants, taverns and coffee bars, beautiful nature and the crystal blue sea. The vicinity of the peninsula Peljesac, Elaphite islands, the island of Mljet, the delta of Neretva river and the ancient town of Dubrovnik, make Slano perfect destination for those that would like to explore the are of the south Dalmatia, its unique gastronomy, historical and cultural heritage. Beautiful beaches with shallow entrances and many possibilities for daily excursions to nearby islands, other places on Dubrovnik Riviera or to the rich and diverse hinterland, make Slano ideal for families with small children. If you are looking for a peaceful vacation in unspoiled natural and historical environment, but with all the necessities of the modern life, we invite you to visit the beautiful town of Slano. We are sure that you will be astonished by this pearl, first one in the stream of unique holiday resorts and villages that stretch from the foot of Peljesac peninsula all the way to the city walls of the ancient town of Dubrovnik, thus forming the unique and ever-inviting Dubrovnik Riviera. And when you come, and explore this area, we are sure that you will soon come back again. Welcome!