Apartments Orebic, peninsula Peljesac - Browse through our offer of private accommodation in apartments and holiday houses in Orebic, Croatia. Large offer, with most detailed descriptions available. Great prices and fast on-line booking of accommodation for season 2021! 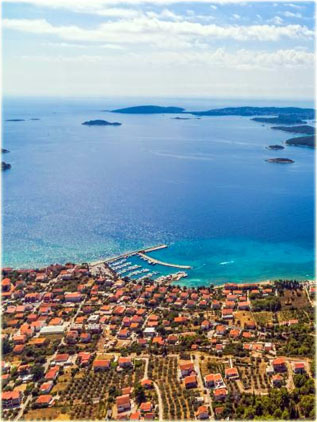 Orebic is the largest town on the Peljesac peninsula, situated beneath Mount St. Elijah, in the western part of the peninsula, across the sea from the town of Korcula and Lumbarda, with which it is well connected by regular ferry lines with the island of Korcula. Orebic can be reached by sea (ferry from Korcula town) and land (the road that goes through the town of Ston and then across the entire Peljesac Peninsula). The city's name derives from the surnames Orebic naval family, which at the end of the fifteenth century established the core of the village and built citadel. The closest larger settlements on the penisnula Peljesac are Kuciste and Viganj to the west, Trstenik and Zuljana to the east and Trpanj to the north.

Orebic and the surroundings have close to 2,500 residents, and the number grows manifold during the tourist season. Local residents are mainly engaged in tourism and agriculture, and in particular it should be noted that in the area of ​​Orebic are two of the most and the best locations for growing the best Croatian grapes Plavac Mali - Dingač and Postup. It should also be noted that the recently proven that Plavac Mali one of the parents of the popular varieties of Californian variety Zinfandel.

Throughout history, Orebic belonged to the Republic of Dubrovnik, as its westernmost settlement became known as a place for sailors and captains, which is visible at every step of this magical beautiful place. Long tradition of civilization in the area of ​​Orebic, starts in the late 16th century, when the area began to be settled by marine merchants  and rich families of the Dubrovnik Republic. In the 17th Orebic century became the most important center of Dubrovnik merchant navy. With the fall of the Republic of Dubrovnik, Orebic naval tradition does not disappear, but the opposite is getting a new flywheel in the development and establishment of a "Peljesac Maritime Society" (1865)., Inc. for the construction and exploitation of ships for long voyages. The thing which confirms the important role of Orebic is the opening shipyards year  1875, which was attended by the emperor Franz Joseph.

Houses built along the northern coast road give the city Orebic urban identity and its gardens are picturesque park zone. Orebic is now mostly a tourist resort, a few are still sailors or farmers. Many of the old captain's houses were renovated in the last decades for tourist purposes and have lost their original appearance. There is also Maritime Museum in Orebic, which exhibits an abundance of exhibits which remind visitors of  glorious days when sailing ships from Orebic sailed all the world's seas. High above Orebic, there is an old cemetery, a church from the XV. century, and a Franciscan monastery that was built next to the church. From the elevation at which there is a church and monastery there is a breathtaking view of Peljesac, Korcula and nearby smaller islands.

Today the inhabitants are mainly engaged in tourism and out of their city they made very most popular tourist destination that offers everything one needs. From the market, port, hotels, campsites, entertainment and recreational facilities, banks, ATM, many private holiday houses and apartments available for rent, restaurants and small taverns - you can find all it in this charming town, modern and well organized, but also rich in historical and culture. Beautiful pebble beaches that stretch along the coast of the city, with many small islands in the beautiful archipelago of Korcula channel will leave you breathless. We invite you to visit this beautiful place and discover another beautiful and historicaly and naturally wealthy corner of sunny Dalmatia.